If we didn't remember and honor those who came before us there wouldn't be anything to remember so we show respect and honor for our history making, deceased, members. 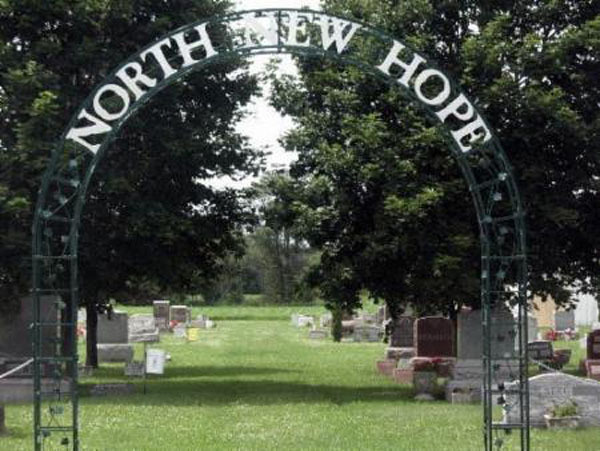 Above is the cemetery arch at North New Hope which was rededicated in 2009. 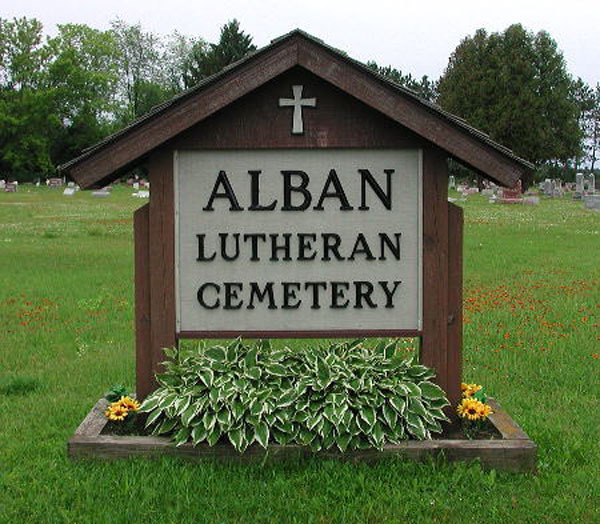 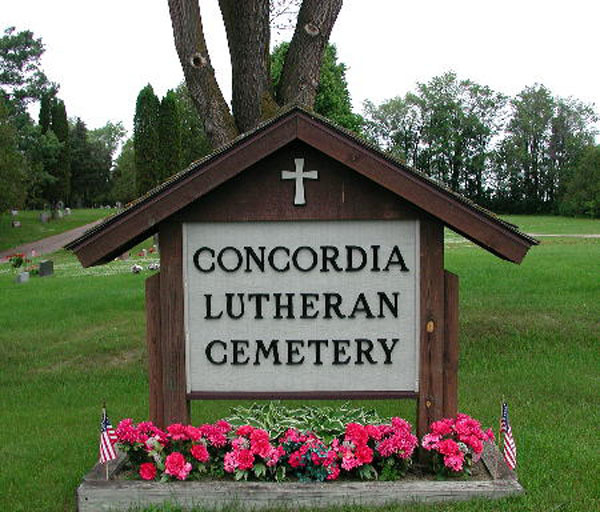 One day Frank & Ann Trzebiatowski decided something should be done with the weather vane from the steeple of Alban Lutheran Church, which was in their possession. They rescued the weather vane from a spot in the woods and it made it’s way to the shop of Lindy Larson. Lindy and Grandson Nick started to refurbish it. They contacted the Faith Church Council about having it saved and put up in the Alban Cemetery, near Rosholt.

The Council was delighted and put Lindy in charge of contacting the Central Wisconsin Electric Co-op about installing a pole on which the weather vane could be mounted. After much work sanding, welding repairs and painting it was ready to go back to where it was many years ago (1879 is the date on the weather vane) Diggers Hot Line was called and with the generosity of CWEC and its crew the weather vane on top of its pole was raised in all its glory on the windy day of May 29, 2012, about 10:30 am. 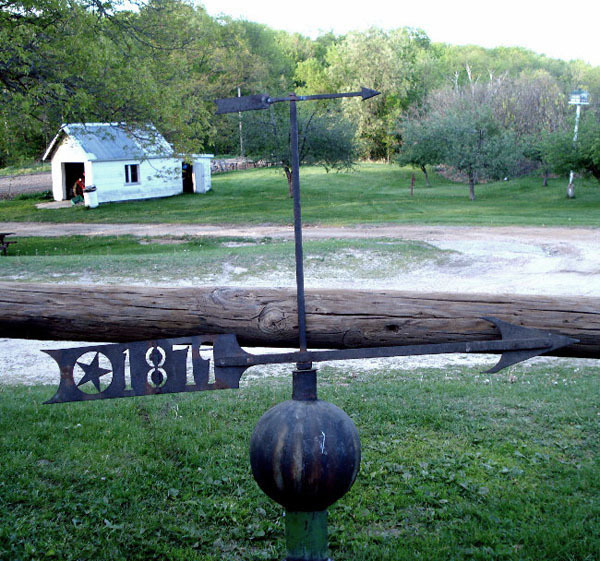 Those present to witness were, Lindy & Dorothy Larson, Al & Betsy Suehring, John Carter, Glen & Gloriette Rutz, the work crew and Brenda Mazemke from CWEC. THANKS to CWEC!!! More info will follow and if anyone has any history of the weather vane, please contact Lindy or Faith Council President, Betsy Suehring, 715-677-3809 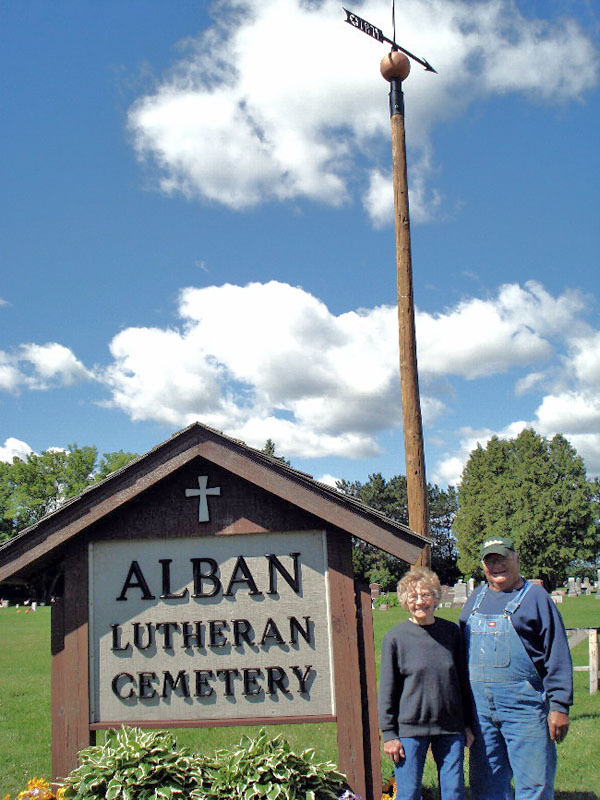 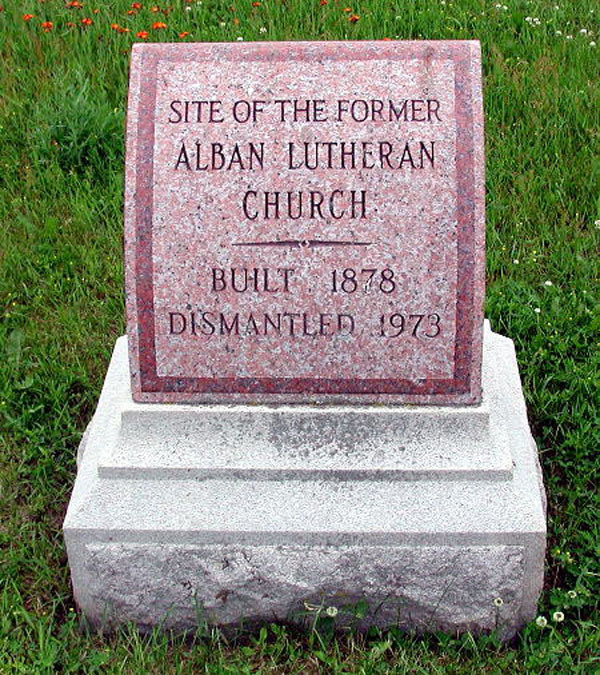 This monument marks the location of the Alban Church building 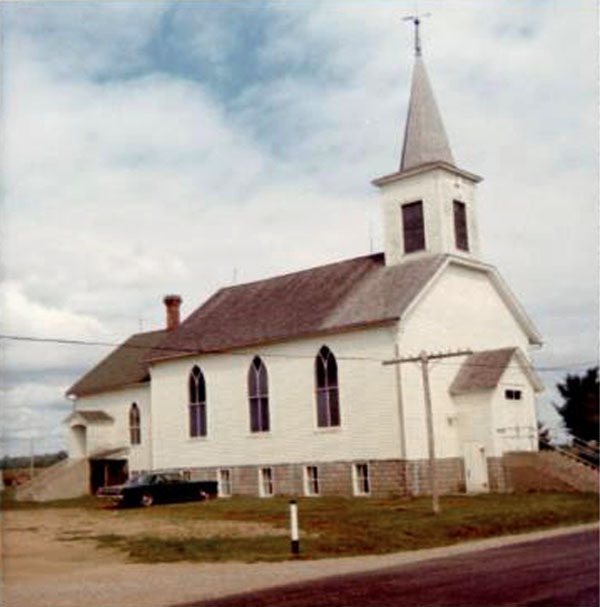 When putting this site together the initial thought was to not get caught up too heavily in the histories of our congregations but rather concentrate on the present and future. However.......if the histories aren't preserved and made available HERE and NOW........then WHERE and WHEN? This writer is 57 years old and is amazed at how many of our antecedents names I can remember as I'm reading these records.......and not only the names but the people. If you feel something is in error please let us know. The only thing worse than no history at all is an inaccurate account. SO.......on with the show: 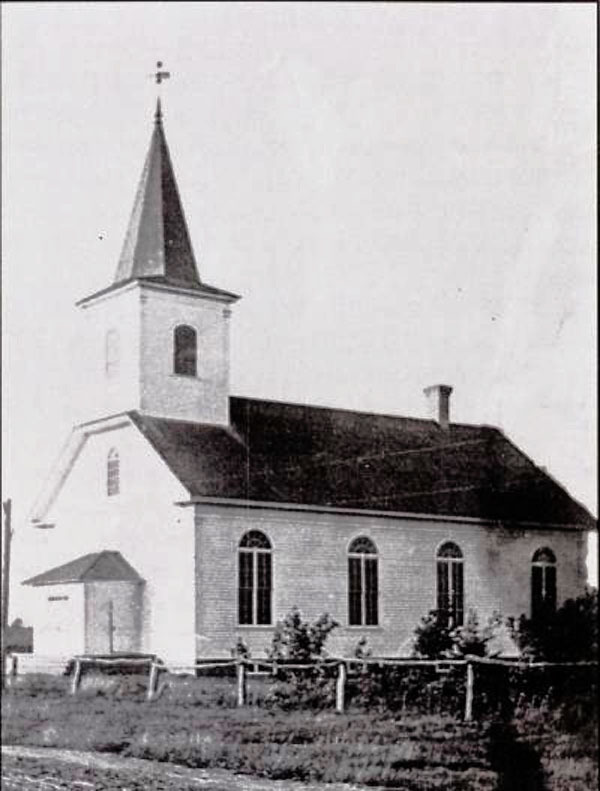 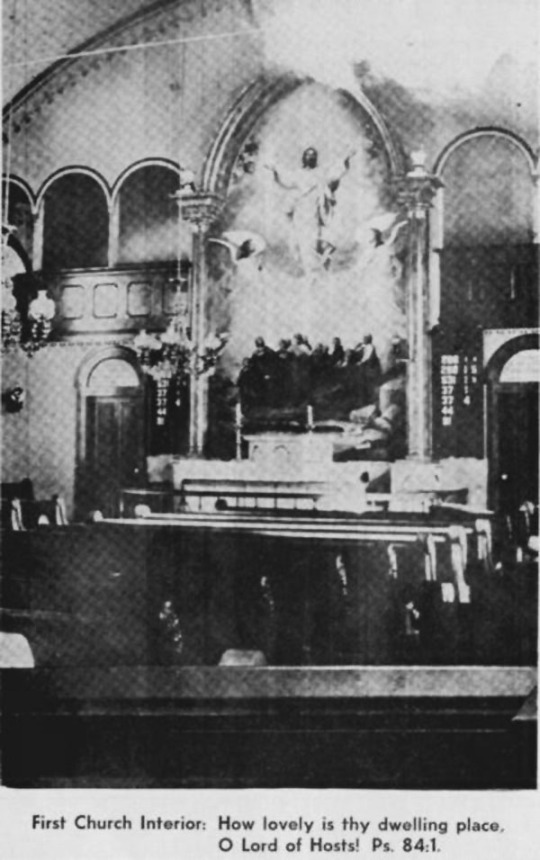 As with almost every other early church group problems arose, there was a division in the congregation, some members left and built another church building located a short way south on County T.......and the two are known as North and South New Hope churches to this day. Thanks to Lenore Peterson (Wogsland) a great deal of the history of the New Hope congregation has been provided and will be made available for download as time permits.

One of the earliest pastors to serve these country churches was pastor K. O. Eidahl. There is more about him and his successors in the PDF's near the end of this page. At any rate Eidahl lies in in the cemetery at North New Hope and here is his grave marker. 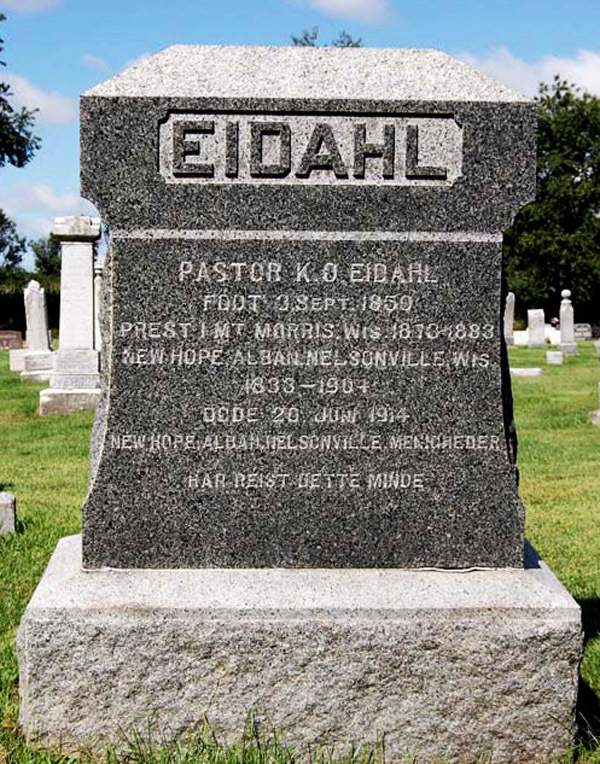 Just today, August 9, 2015, this writer discovered this 1889 Certificate of Confirmation document, written and signed by pastor Eidahl, hidden in plain sight, on a table in the entrance at North New Hope church. 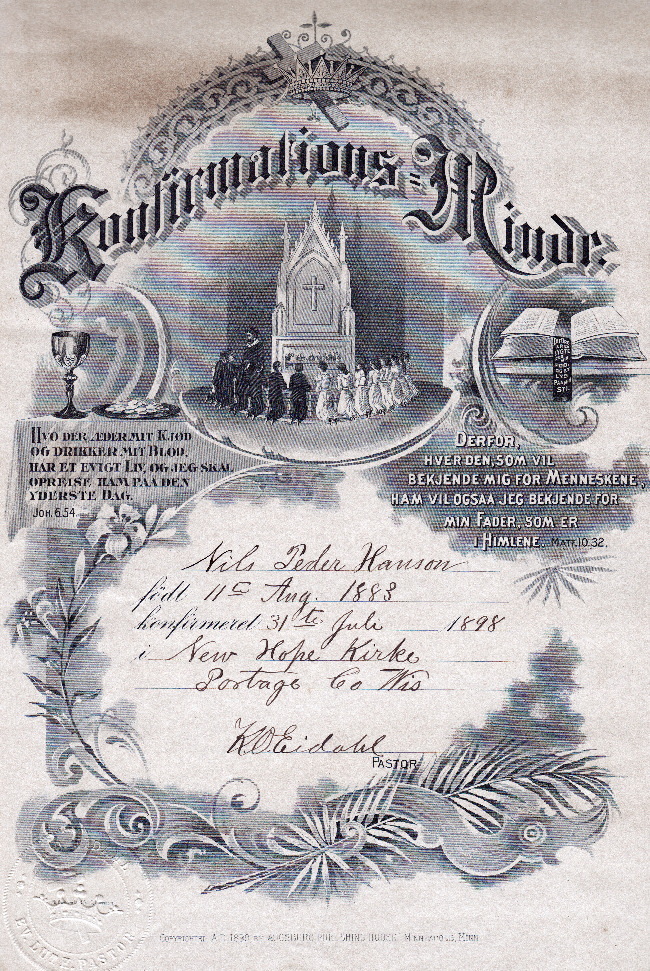 The Bible verse at the upper left reads John 6:54; Whoso eateth my flesh, and drinketh my blood, hath eternal life; and I will raise him up at the last day.

The verse at the right reads Matthew 10:32; Whosoever therefore shall confess me before men, him will I confess also before my Father which is in heaven. 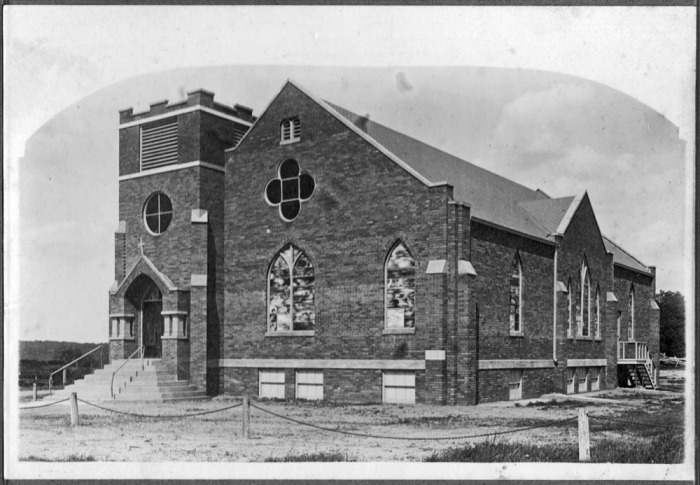 The photo above recently showed up in the church office.

Faith's history is a bit more complicated but begins in 1878 with the founding of Alban Lutheran Norwegian synod congregation and meeting in members' homes until such time as a building could be constructed.......and, in 1882, it was at the corner of present State Highway 66 and County Road A, where the Alban cemetery is located.

Previous to 1878 folks in the township of Alban attended services every now and then at New Hope but distance made attending church nearly an all day commitment. New Hope and Nelsonville had been sharing a pastor and this pastor agreed to also serve the newly formed Alban congregation.
After that things get complicated and even Elderon gets into the picture.
To further complicate things it seems New Hope and Alban were a single parish until sometime in 1920.
It is far too complicated to explain here but the best history to date of the Alban congregation was received just today (January 11, 2009), from Joan Larson, in a booklet from the Sunday, October 4th, 1953, 75th Anniversary of "Alban Evangelical Lutheran Church" and may be downloaded as a pdf file at the ALBAN HISTORY link at the bottom of this page.

Anyway.......things in the Town of Alban wouldn't be a bed of roses either and an argument ensued over some doctrinal issues.
This writer remembers hearing tales of the main issue being the use of the Norwegian language in the service. The 75th Alban Anniversary booklet relates that even before then nobody could recall exactly what the squawk was all about. These things seem silly now but at the time were, obviously, very serious.......serious enough to split congregations.
At any rate, another congregation which called itself Concordia was formed and located a couple miles, or so, north on Highway 49.
Getting around wasn't so easy in those days so to accommodate country dwellers so Alban assisted in the building of a chapel in the town of Harrison south of the little settlement of Norske. The chapel building stands at the corner of County Roads NN and P and is now a residence.
Distances again proved to be a challenge to those wishing to worship so in 1919 folks in the Galloway area organized yet another Lutheran congregation and named their parish Christ the King. 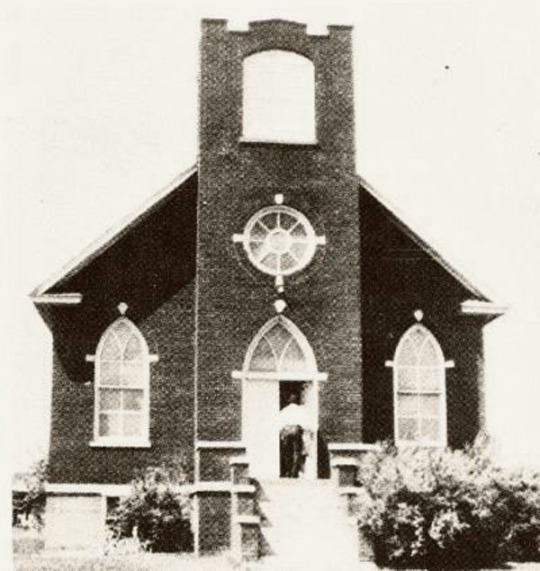 Unfortunately Christ the King's existence came to an end in 1957 due to dwindling numbers. Years of Alban and Concordia sharing a pastor, members letting go of some old hard feelings and a very persuasive pastor led to the merging of all three parishes and Faith Lutheran congregation was founded.
So now while Faith Lutheran congregation was one members still had strong feelings about their church buildings and church services alternated between Alban and Concordia, in Rosholt, for many years. In the six months of "hard to heat" seasons services were held in Rosholt at Concordia (long ago relocated into the village at the urging of J. G. Rosholt) as that building was somewhat smaller and easier to heat. 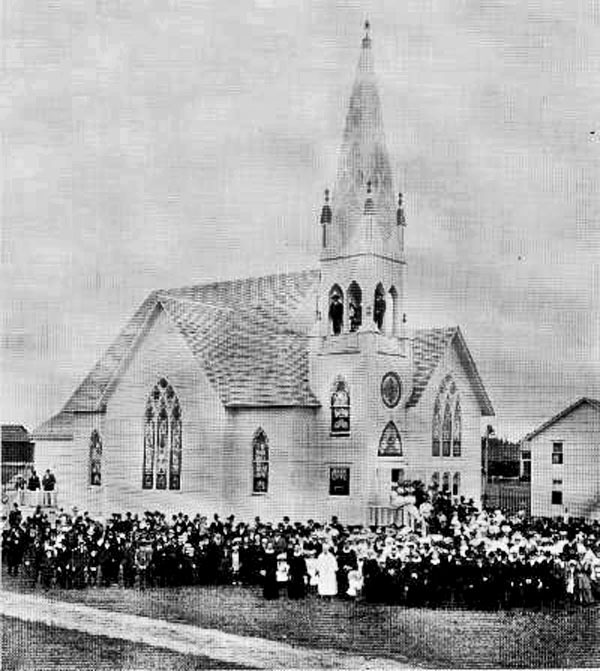 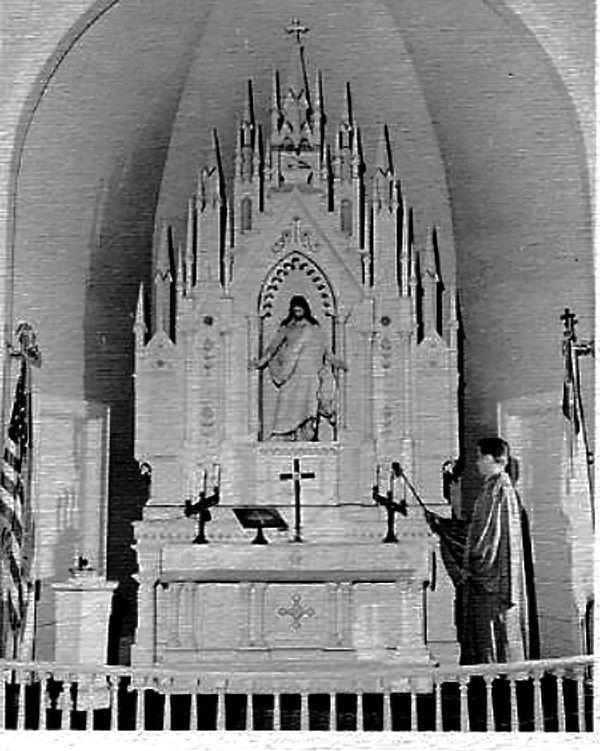 The rest of the year services were held at Alban, pictured below. If this writer remembers correctly the inscription on the Alban bell, which was received in 1892, reads "Norske Dansk Evangelical Lutheran Church in America". 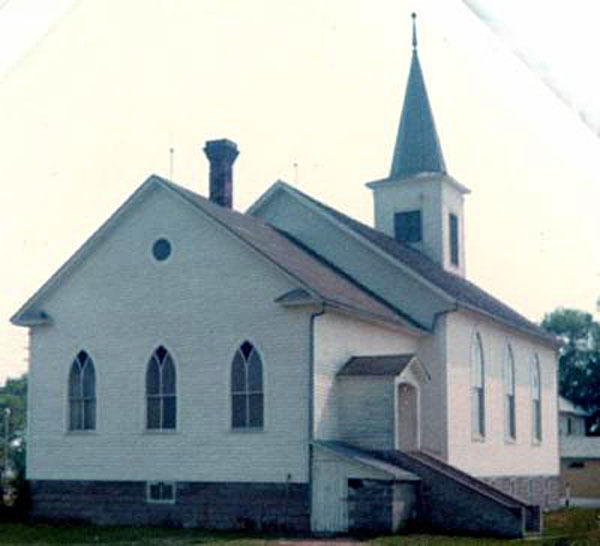 Photo (below) is from the 75th anniversary at Alban church observed  on October 4, 1953, and published in the Steven's Point Journal. The caption reads:

Some of the principals in the observance of the 75th anniversary of the Alban Lutheran congregation Sunday are shown here in front of the altar at the church. At left is Odin Eidahl, Leland, IA., son of the late Rev. O. K. Eidahl, who was pastor of the church from 1883 until 1904. Next is Rev. G. A. Anderson, Groton, S.D., a former Alban resident who was confirmed there in 1918. Next is Rev. Harold Farseth, Washburn, WI., son of the late Rev. O. C. Farseth, who served the church from 1904 until 1910. At right is the present pastor, Rev. W. L. Anderson, at Alban since 1947. About 350 persons attended the morning services at the church and 450 were at the re-union of confirmation classes held in the afternoon. Included were 160 sons who have been confirmed at the Alban Church. 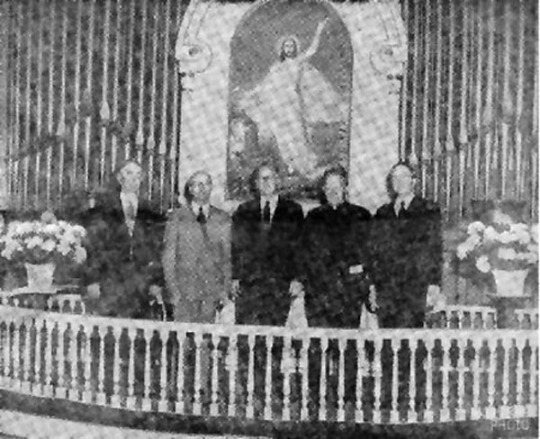 The history of Faith Lutheran was taken from a 1961 Pentecost Day "Dedication and Rite of Confirmation Services" which must have been quite the deal as Rev. Dr. Theodore Ohlrogge, who I believe was District President at that time (I am fairly certain we didn't have synods and bishops in those days), was present to preach. Hometown son and seminarian Sherman Iverson was the lector.  The Faith history was written by Malcolm  Rosholt and titled "A Brief History".  Nothing by Malcolm ever was BRIEF.......but WAS thorough as evidenced by the five and one half page story. It is, however, as complete a history as is likely to be found and worth the download. The two photos below were included in a fairly elaborate program specially printed for the occasion held at Concordia. 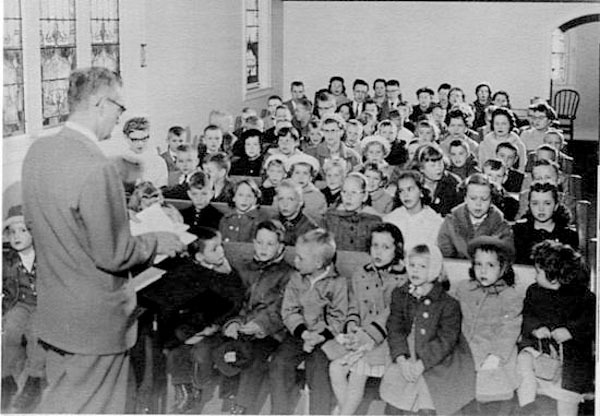 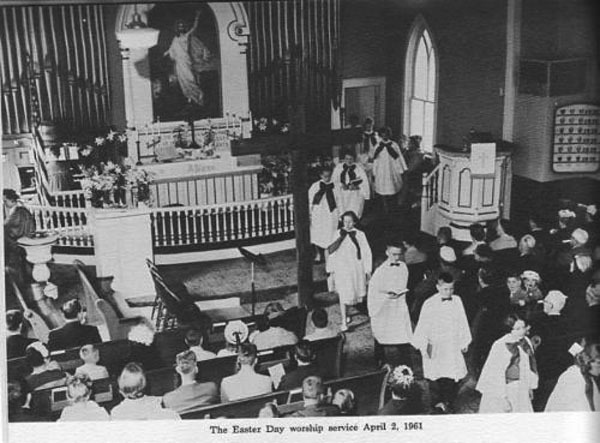 Getting back to the "6 months at Alban and 6 months at Concordia" arrangement (some people counted the days (wink)). That "deal" worked out for a quite a while but was still a nagging reminder of the divisions which had occurred.
Another persuasive pastor came along and on July 5, 1970, a groundbreaking ceremony was held for the building of the present church building of Faith congregation.
The new building was dedicated in 1972 on August 27th.

I found a link at the Portage County Historical Society of Wisconsin Online Archives which has a more complete account of the three original churches which now make up Faith Lutheran. Written by Malcolm Rosholt in 1972 at the occasion of the dedication of the new church building.  Click on the history button to open the link in a new page. HISTORY 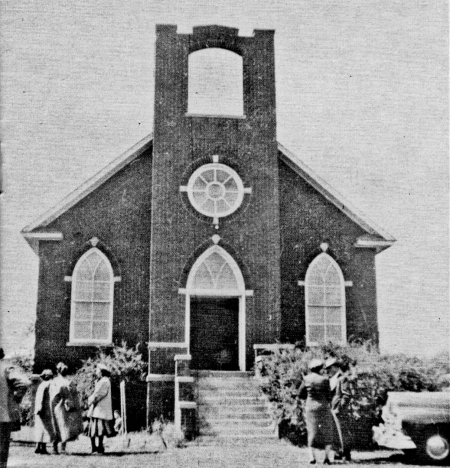 Christ Lutheran of Galloway in 1940 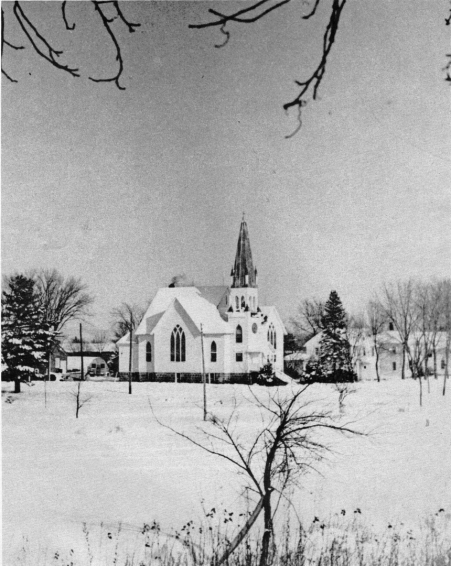 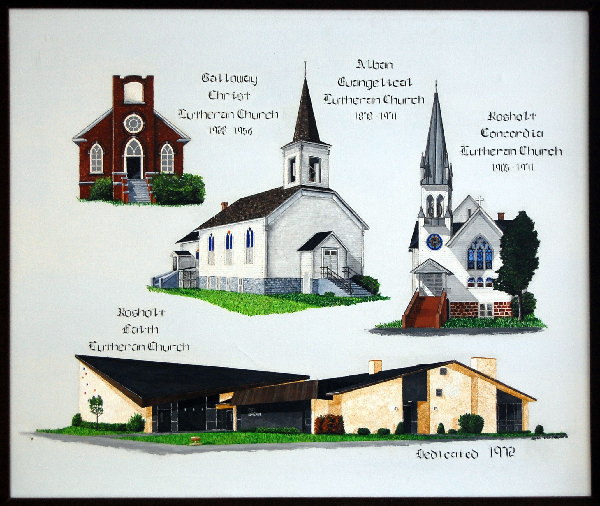 The above composite painting was done by Lynn Larson and depicts the three churches which became one. A bell tower was designed at the same time as the building but, frankly, the congregation couldn't afford it at that time. It would be October 23 of 1983 when the bell tower was dedicated.

The histories of both congregations are available for download in PDF format below.

The short history of North New Hope was taken from the 2002 church directory.

The complete history of New Hope is copied directly from an original typed history "PREPARED FOR THE 125th ANNIVERSARY OF THE CONGREGATION" observed October 17 of 1982.